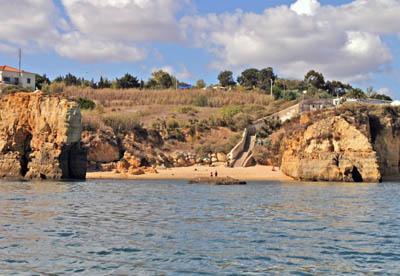 Suggest Place to Visit
1682
Cozy beaches of golden sands and calm clear waters, embedded in the rocky lace of this portion of the coast between Batata Beach and Ponta da Piedade and named after the coloring of the rocks.

Beaches located between the Batata Beach and Ponta da Piedade.

There are several beaches interconnected by tunnels dug into the rock, which have small tongues of soft sand, offering temperate, crystalline waters, and protection in the shadow of the huge yellow and reddish cliffs. Here, do not feel the prevailing winds and you can jump from rock to rock appreciating the creatures of the marine world that the low sea leaves uncovered. From Praia Formosa (common, from Batata), passing by the beaches of Men, Students, Caldeira, Pinhão, Dona Ana, Camilo, Pinheiros, and ending at Praia Grande, the tour is completed by these magnificent coves embedded in the rocky lace of Costa D'Oiro.
Comments

We don´t have yet any comments about:
Costa D'oiro Beaches (Lagos)
Be the first to leave a comment as it is very important to inform other people